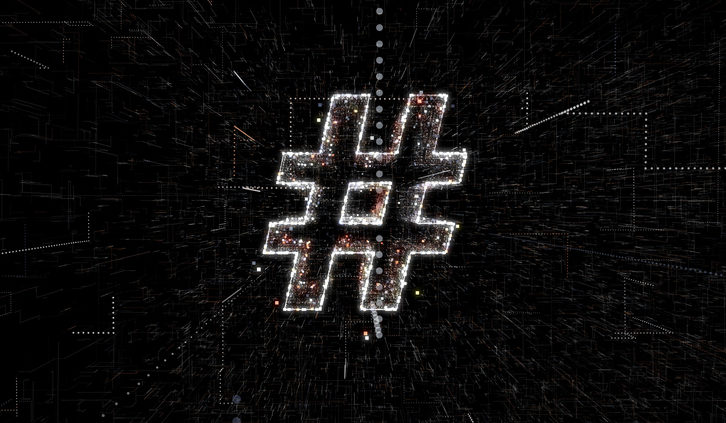 Hashtags are the words or phrases users of Twitter, Instagram, and other social media platforms employ to self-categorize the subjects of their conversations. A good hashtag is short, descriptive and, above all else, memorable.   Some are so impactful that they rise above their utilitarian role in social media, becoming part of our 21st century lexicon; think about #BlackLivesMatter, #MeToo, #OscarsSoWhite, #BringBackOurGirls, #IceBucketChallenge, and #LoveWins.

Unfortunately, some hashtags, while popular and earning lots of “likes” and “shares,” actually tell you very little about the subject being discussed. For example, as of this writing, the Top 10 Instagram hashtags are #love, #instagood, #photooftheday, #fashion, #beautiful, #happy, #cute, #tbt, #like4like, and #followme. Though these are interesting hashtags, they are quite general and less than informative about the subject at hand.

To get a sense of the full range of hashtags making their way through cyberspace, last year the Top 10 Twitter hashtags were #ico, #ethereum, #crypto, #crowdfunding, #medicaid, #blackhistorymonth, #womenshistorymonth, #photography, #iwd2019, and #cryptocurrency. (Apparently, Twitter users have a lot of interest in digital currencies.)

What Businesses Need to Know about Hashtags

Coming up with a strong, effective hashtag can be a formidable challenge for today’s enterprise. Too often, what the marketing department thinks to be a logical or “obvious” hashtag can end up being just the opposite.

This is where the power of machine learning can be of great help. For instance, our company, Northern Light, which specializes in the application of machine learning and artificial intelligence to enhance search and social media analysis, had a pharmaceutical company interested in using social media to market a new cancer drug. However, when we looked at the terms most frequently associated with the hashtag “#cancer,” we founds words like “Pisces,” “ascending,” and “astrology” — words associated with the astrological sign “Cancer,” not the dreaded disease.

We addressed this problem using our Social Analytics application. First, we built a training model of known “good tweets” about the topic of cancer (the disease, not the astrological sign). We then used machine learning to semantically analyze the tweets in candidate hashtags to find those whose content was similar. This analysis offered up a list of words proven to be most relevant to the topic. These terms included “gene,” “immunotherapy,” “cell,” “biotech” and “gene editing.” The pharmaceutical company could now use these key words and hashtags to create a more effective social media campaign.

Similarly interesting insights were found comparing the use of #diabetes and #type2diabetes on Twitter over a 30-day period.  #diabetes generated 205.5 million impressions, 25 times the 8.5 million generated by #type2diabetes, affording far greater visibility for fewer precious characters.

We have used Social Analytics to conduct keyword and hashtag analyses for other clients as well. For example, when it came to tweeting about #IoT (Internet of Things) for urban management, we were faced with a decision: should we pick #smartcities or #smartinfrastructure? Although the two hashtags are 80 percent semantically similar, when used in the same conversation, the term #smartcities gets three times more impressions.

So, what do people on Twitter want to know most when it comes to another industry: hospitality? For Airbnb, Social Analytics reveals that the hashtag with the most impressions ― by a wide margin ― is #howtohost.

What to Do About Your Company’s Hashtags

Ultimately, selecting a hashtag shouldn’t just be a matter of guesswork or “gut instinct.” It needs to be studied and analyzed as carefully as any major marketing decision. Thanks to machine learning, Social Analytics can provide your organization with the insights and guidance needed to engage audiences and be a more significant part of the global conversation.

For more information about Social Analytics, click here to get started. Or contact us to start a conversation.